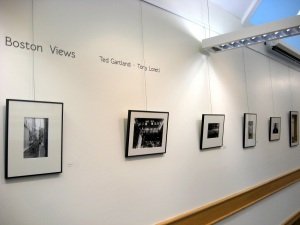 Boston Views combines the works of photojournalist Ted Gartland and photographer Tony Loreti at the Belmont Gallery of Art during the month of March in conjunction with One Book One Belmont 2011, a town-wide reading program presented by the Belmont Public Library. In support of the compelling story and historical themes of the featured title, Stephen Puleo’s Dark Tide: The Great Boston Molasses Flood of 1919, the black and white images on view reflect upon Boston’s rich history of culturally oriented life in its various neighborhoods and capture moments of history in its making.

Tony Loreti’s selections—shot in downtown Boston and neighborhoods all over the city—depict everyday occurrences and show the “complex multicultural mix that makes up this ever-evolving city”. Loreti’s affinity for the colorful culture of Boston’s neighborhoods may have its origin in the memory of his Italian grandfather who made wine in the backyard of his home on the Norh Shore. Eventually, the space used for storing wine offered Loreti’s first darkroom experience under the tutelage of his uncle. Loreti’s burgeoning interest in photography as an adolescent continued, leading him to a degree in filmmaking from Boston University and a Master of Fine Arts in photography from Massachusetts College of Art. Today, Loreti is an instructor of photography at The Cambridge School of Weston where he has been a faculty member since 1997.

“I made independent films—including documentary films of the streets of Boston—before switching to still photography in 1980. Over the years, the streets of Boston (and surrounding communities) have been the most consistent subject of my photography” says Loreti. “My wish is to make an accurate and visually compelling record of the life of the city, as seen in its public places” and to “make a clear representation of an aspect of the workd as it existed at a particular moment”. Perhaps a measure of his success is evidenced by the 2010 purchase of ten of Loreti’s Boston street photographs by the Print Department of the Boston Public Library for their permanent collection.

Ted Gartland first walked into a Boston newspaper City Room in 1969. He hasn’t left yet. His photojournalistic coverage of Boston has been extensive, “like a map of the city, from the championship Celtics to the iconic Red Sox”, or as Gartland might say, ‘from the Gahden to the Pahk’. While personalities larger than life often have been the focus of Gartland’s lens, so too have been events larger than life such as the always changing meteorological landscape of the city’s weather, for which he shared the 1978 Pulitzer prize for photography as a member of the staff of the Boston Herald American, for its coverage of ‘The Blizzard of ’78’.

Outside the city limits, Gartland has chronicled events as disparate as the phenomenom of Elvis Presley’s Graceland to the opening of the Berlin Wall. ‘Its like a lifetime pass to the circus’, claims Gartland, who currently staffs the Assignment Desk for the Boston Globe.

Ted Gartland and Tony Loreti each have spent a lifetime behind the lens of a camera on the streets of Boston. They share a love of of the city. Together, they provide a window for us to view moments of both anonymity and influence spanning decades in Boston.

Read more about Tony Loreti and Belmont Public Library’s One Book One Belmont.