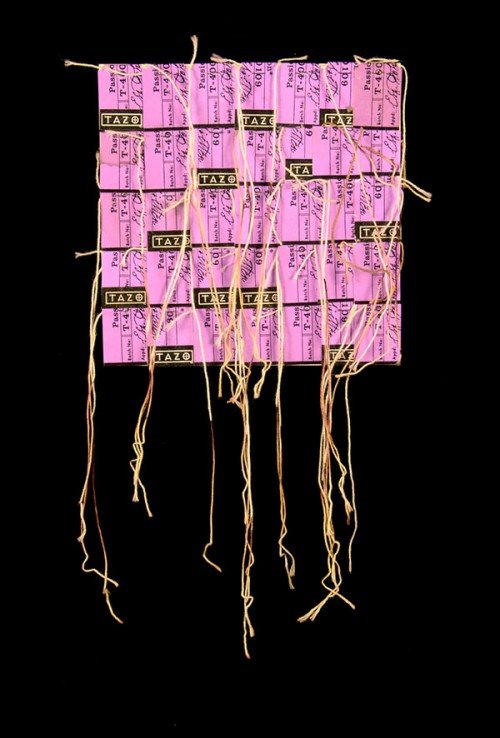 Did you know that teabags can be used for more than just brewing delightful cups of tea?!

In this exhibit, Christiane Corcelle transforms teabags and their components into works of art. This show has many surprises and is sure to make people think outside of the box.

For years, the French-born Corcelle has collected discarded objects as part of her creative process. Since 2011, she has been working with used tea bags and their components, including strings and labels to create over 100 unique pieces that explore variations in composition, repeating patterns, and recurring elements in a deeper way, and from a greater variety of perspectives.

I have always been interested in the idea of re-using everyday objects in my art. Living in a society of consumption, I want to share the many fascinating aspects of what one can do with simple everyday “trash” objects such as used tea bags.”

Corcelle transformed the tea bags and labels by altering them, sewing them, rolling them, gluing them, adding found objects to them, or printing on them. The finished pieces are unified and coherent, but individually they are all unique.

After seeing this beautiful and unusual show, gallery visitors will likely never look at a tea bag quite the same way again,”

— Rebecca Richards, co-director of the BGA.

Thanks to all who attended the artist talk on Sun., March 15!

Here are some pictures from that event:

Here are some pictures from the artist reception on Friday, February 13.

Thanks to all who attended!

Christiane Corcelle’s artwork has been exhibited throughout the US, China, Vietnam and Peru. Her works are in a number of private and public collections, including the MFA, the Boston Public Library, the Vietnam Fine Arts Association in Hanoi and the China Academy of Art in Hangzhou. She has taught workshops and classes at the Maud Morgan Center, Shepherd Print Studio, the Art Institute of Boston at Lesley University and Framingham State College. Corcelle serves on the board of the Boston Printmakers, an international association of printmakers from North America.

Since opening its doors in July 2005, the Belmont Gallery of Art has presented over sixty shows featuring the work of dozens of artists. The BGA was awarded a Gold Star Award from the Mass Cultural Council in 2007 in recognition of its support for artists in Belmont and surrounding communities.